Home / Behind the Scenes / 50mm RF Lens Makes The R6 Better Than The a7IV?

Some people say we may have egg on our face because of our review of the R6 versus the a74. Are you kidding me? Well perhaps we do. Let’s take a look at these two lenses and just see. 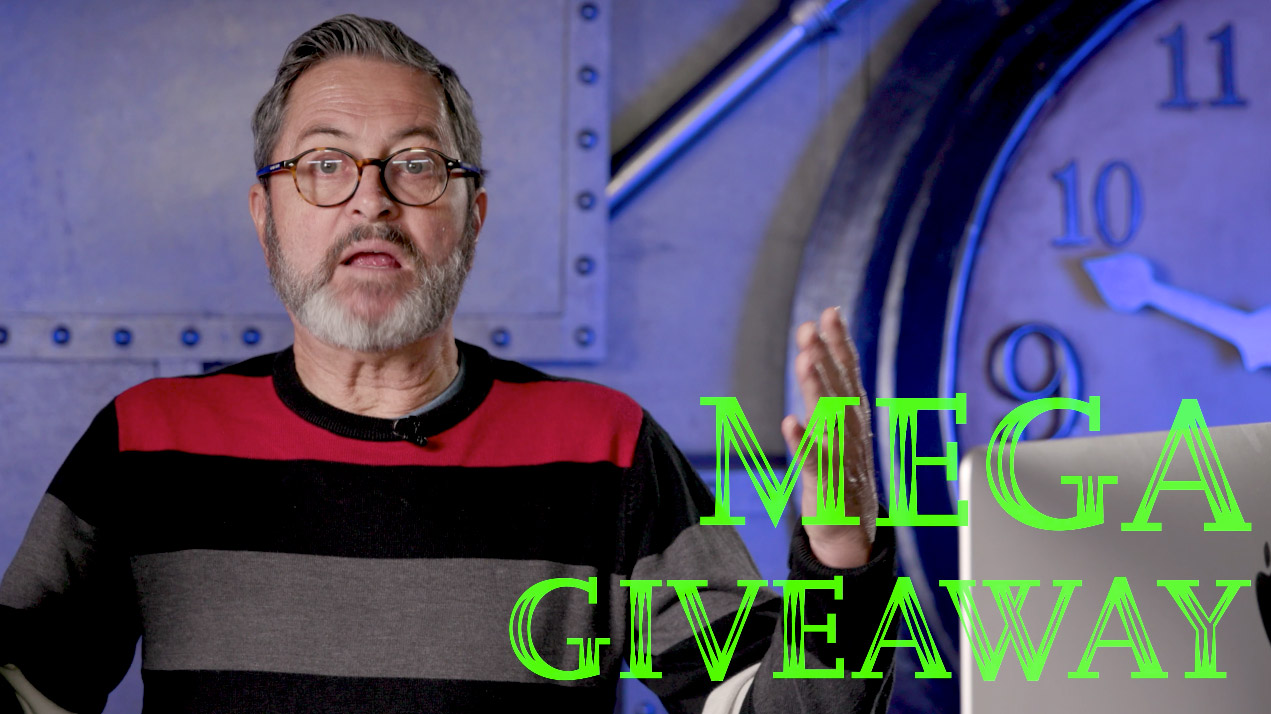 It’s December and time for our Mega Giveaway. We’re going to give away $3300 worth of prizes! $3300 to 14 different winners. We got Tamron lenses. We’ve got Westcott strobes. We’ve got SKB cases, Datacolor, Platypod and The Slanted Lens. We got all kinds of stuff. So get over to theslantedlens.com/giveaway and sign up today. Don’t miss out! 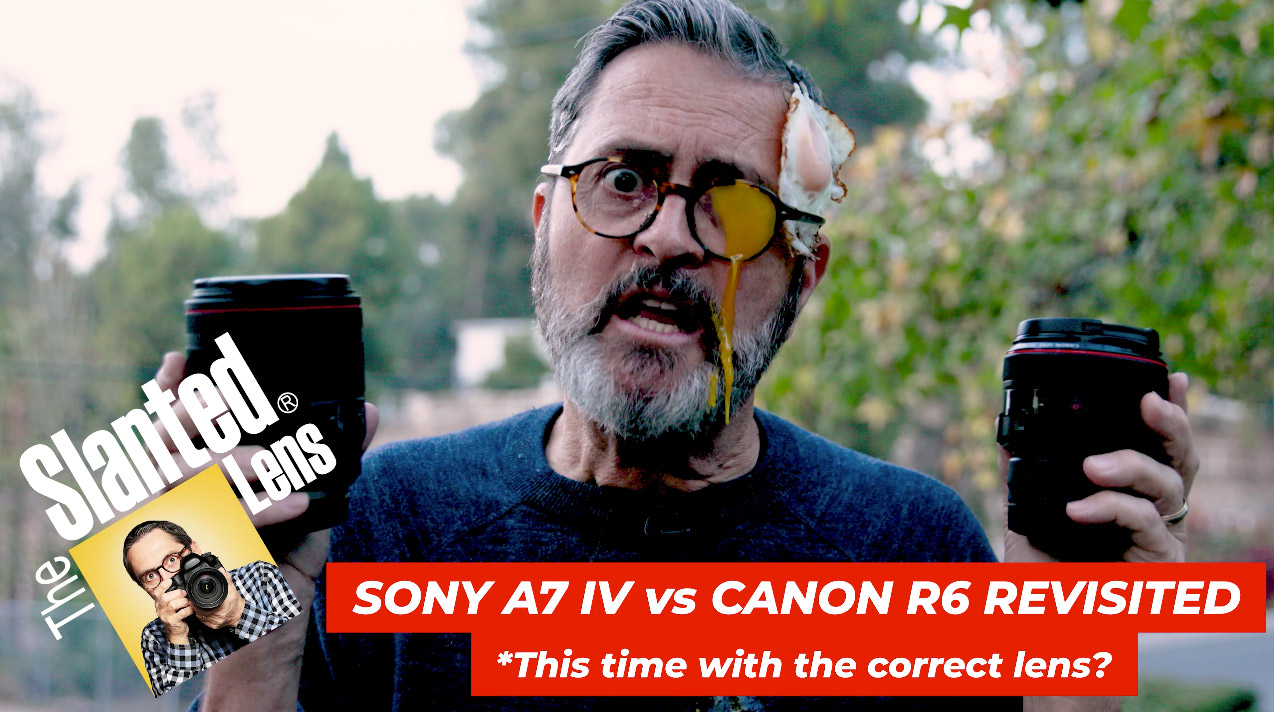 So when we shot our interview of the R6 vs the a7 IV we didn’t have an RF 50mm 1.2 lens. We had the EF lens. Unfortunately, in the situation, we weren’t able to procure one the day we were shooting. So we went with the EF lens. We got a lot of pushback. A lot of pushback! Some people say we were absolutely wrong in doing that. Well we’re going to take a look at it and just see. I have the EF lens here and the RF lens and the Sony. We’re going to take a look at those three again. So it’s kind of a mini comparison again of the a74 versus the R6. But both with the very best glass available for each of those cameras. 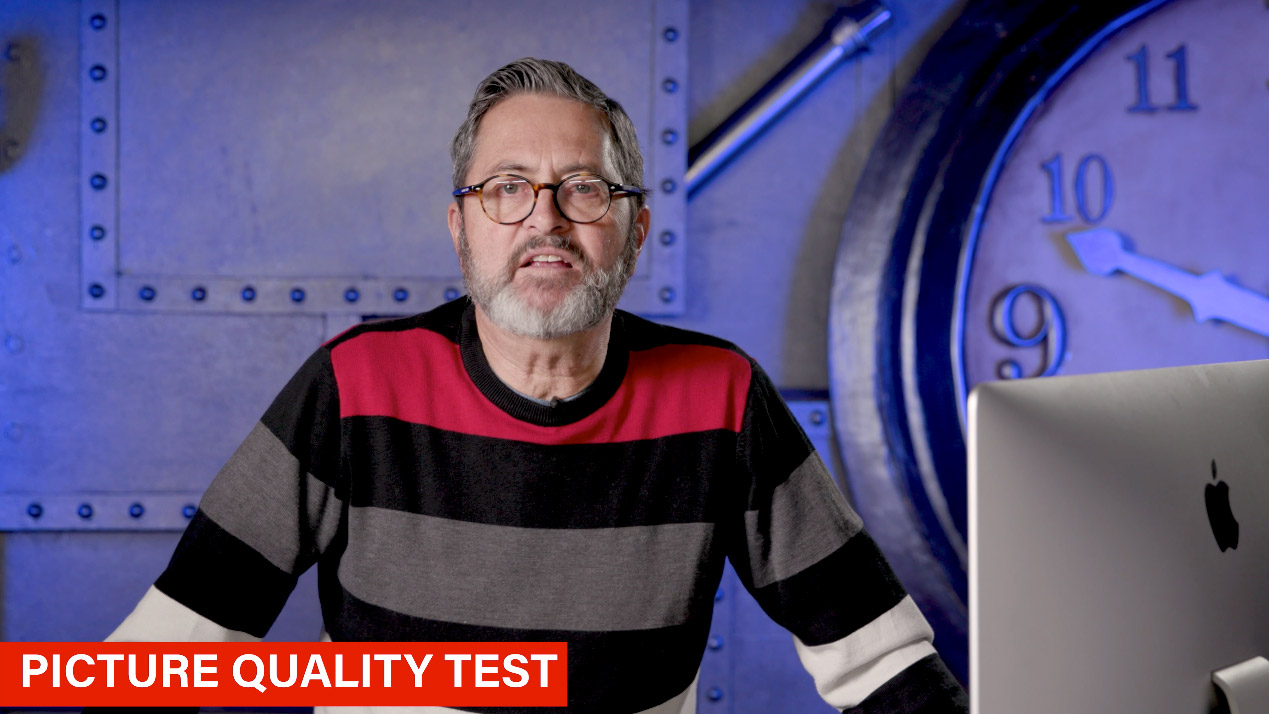 So first off I’m going to take a quick look here at the EF versus the RF lens. So first I have here a little shot I did of the brick wall. 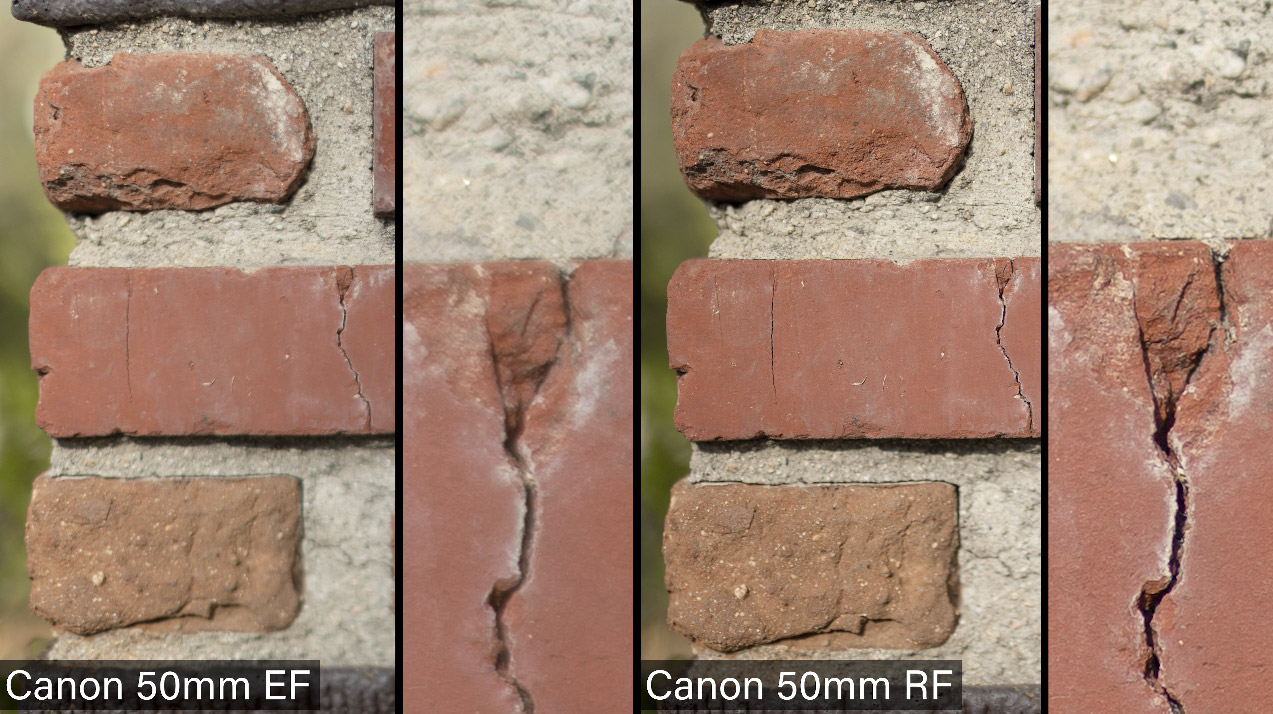 The EF lens is significantly softer. It really is. There’s a significant softness about the EF. The RF is tack sharp. The EF is astoundingly soft compared to the RF. In fact so much so that I went and got a second EF lens thinking, well maybe mine is just really bad. 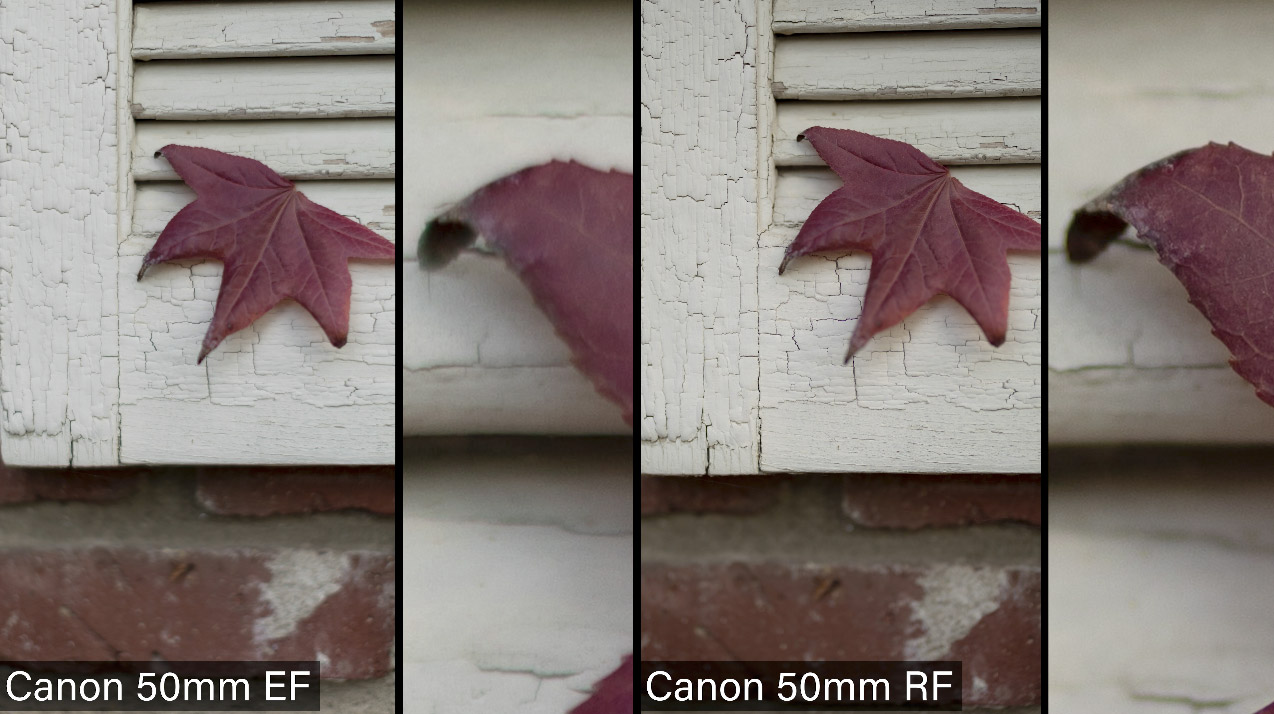 And the second EF lens I got was exactly the same. So the RF is significantly sharper than the EF. And so a fair comparison between the a74 and the R6 is to use those two lenses. So let’s take a look at the a74 versus the R6 with that RF lens versus the Sony new 50mm 1.2. 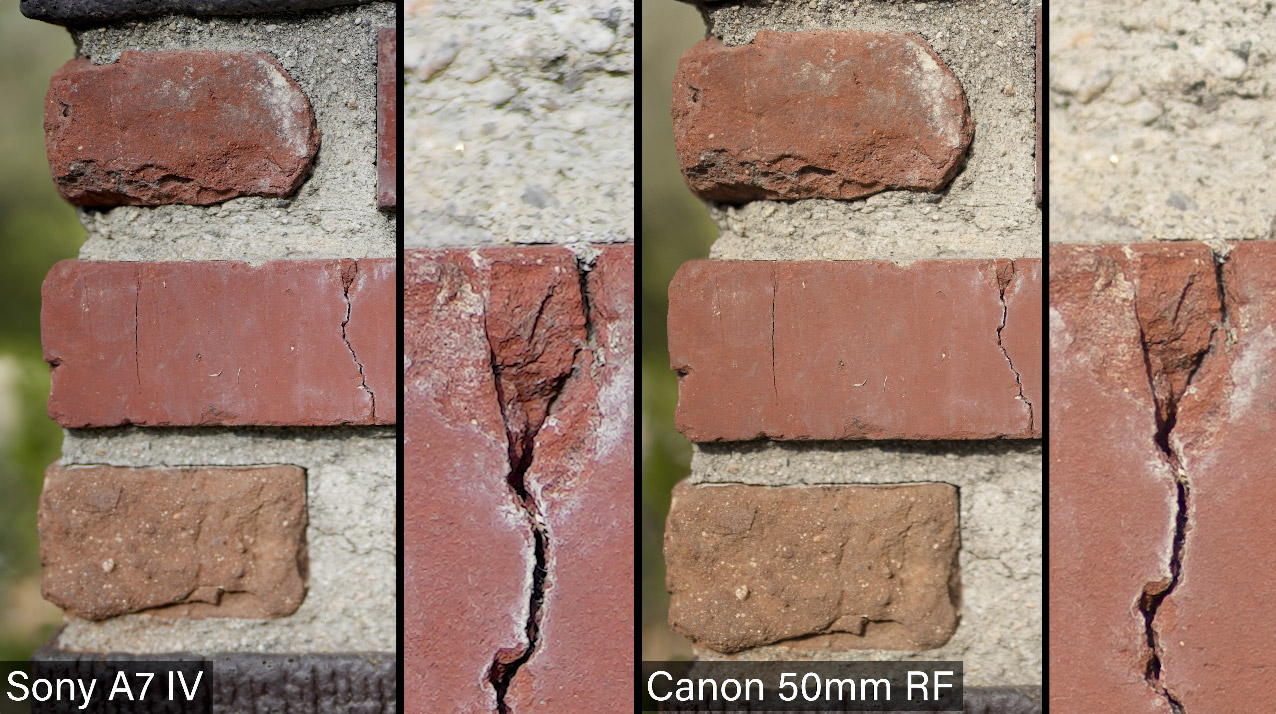 And here the two of them are. As I look at that it is absolutely obvious to me. You have, even yet, even though as sharp as that RF is, the Sony is slightly sharper. And I think that’s probably megapixels more than it is optics at that point. Because you’re looking at a 20 megapixel versus a 33 megapixel sensor. 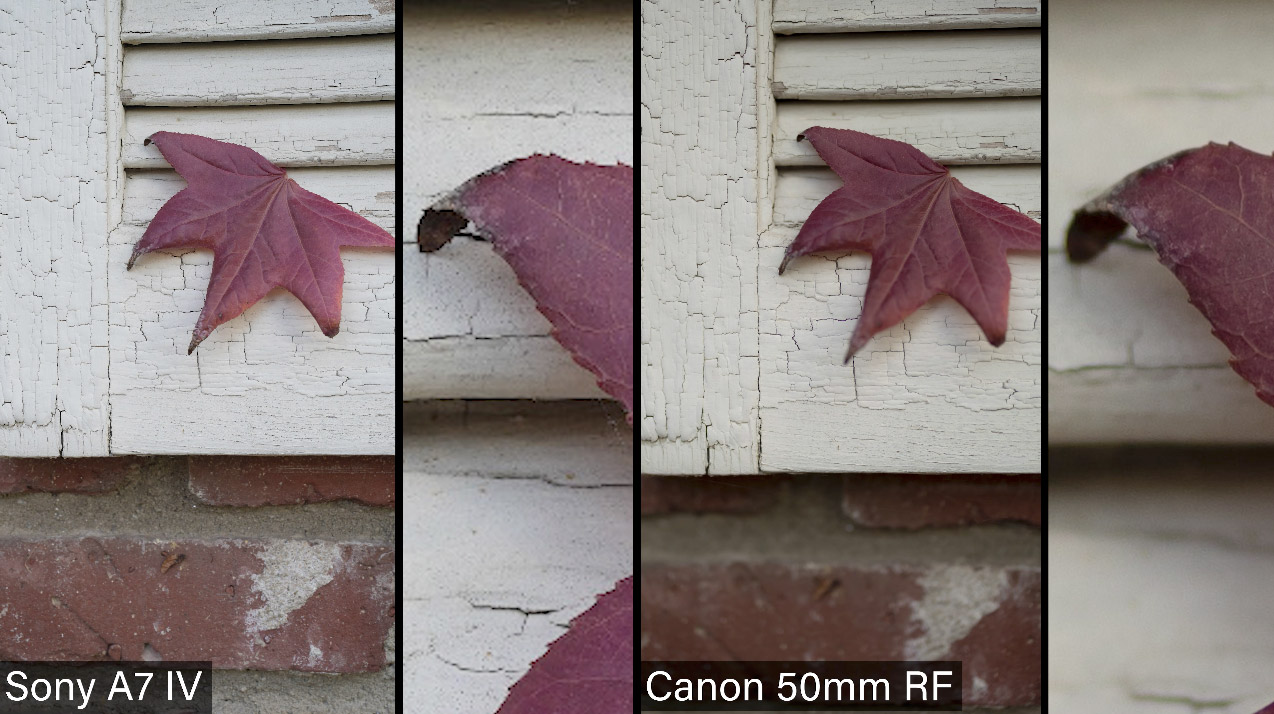 So I think what you’re getting there is really more about megapixels at that point than it is sharpness. Because I think both of these lenses are very, very sharp. And great lenses. 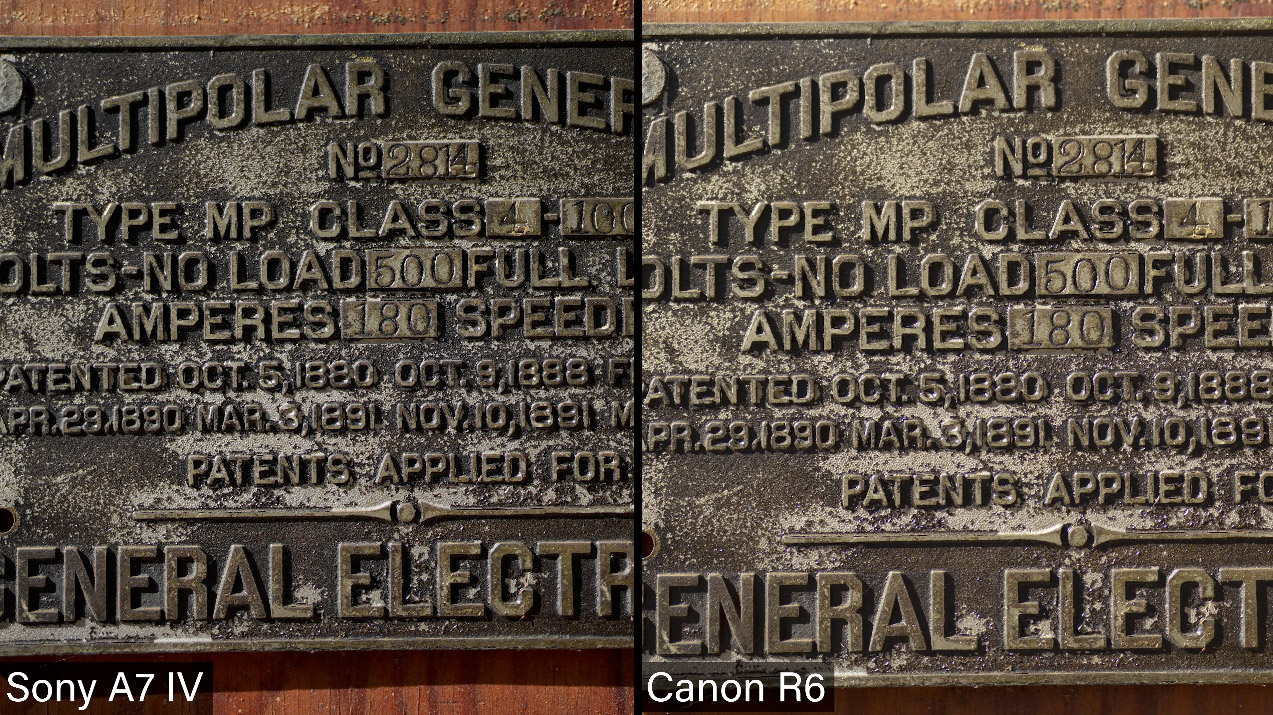 So let’s take a look here at this plate. I love this little plate. It’s an old-fashioned plate off the side of an electrical motor. And if you look at the 500, which is where I focused, I use a single spot focus. 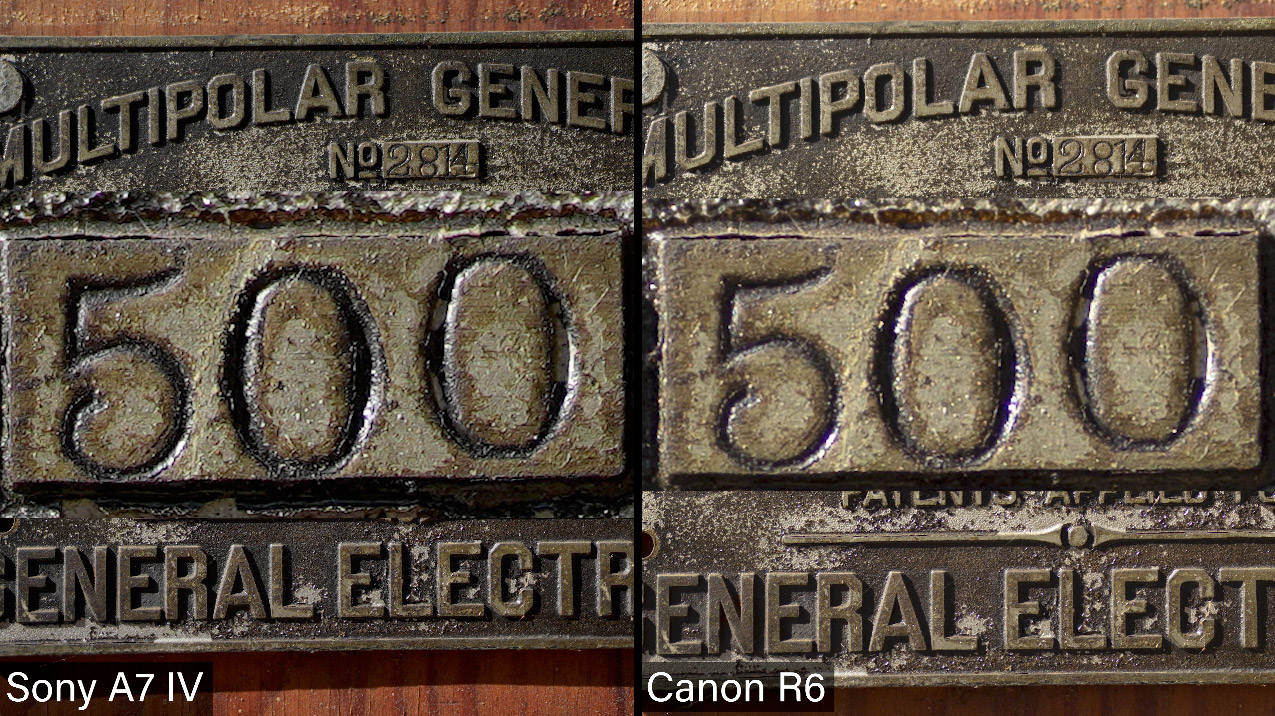 I can tell immediately which one of these if you did not have any labeling on these whatsoever, I can tell you which one is the Sony, absolutely! I’m not sponsored by any of these camera companies. I’m not, absolutely not. In fact I own both these systems. I own a Sony system. I own a canon system. But immediately the Sony is just sharper. It has better detail. I mean it’s just sharper. And again it’s looking like Sony color always does. It’s a little more neutral, a little more coolish. Whereas the Canon in this case is a little more warmish. Which is interesting to me. 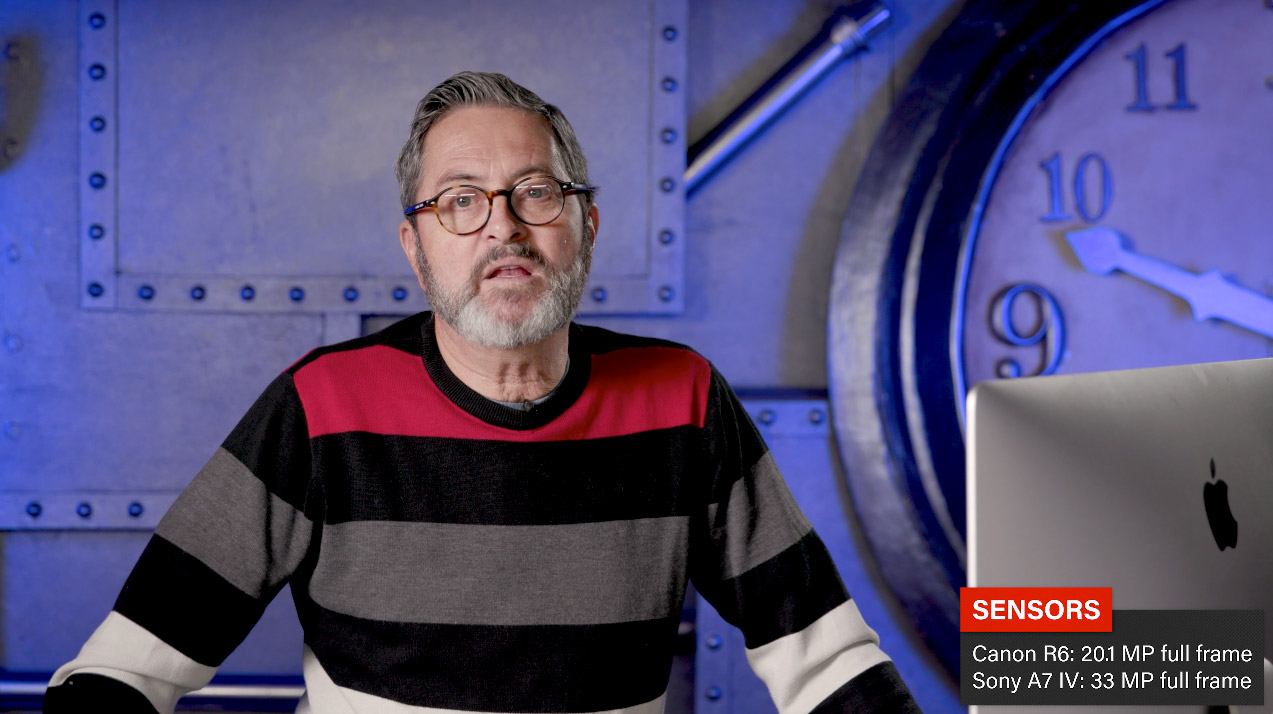 Making that decision about the R6 still boils down to that megapixel size for me. And I think I’d have a hard time with a 20 megapixel sensor because I like things to be able to be blown up larger to be used for prints or to be able to display. I think it’s really worth it to me to be able to crop. Especially if you shoot wildlife and those kinds of things. I like that ability to crop. 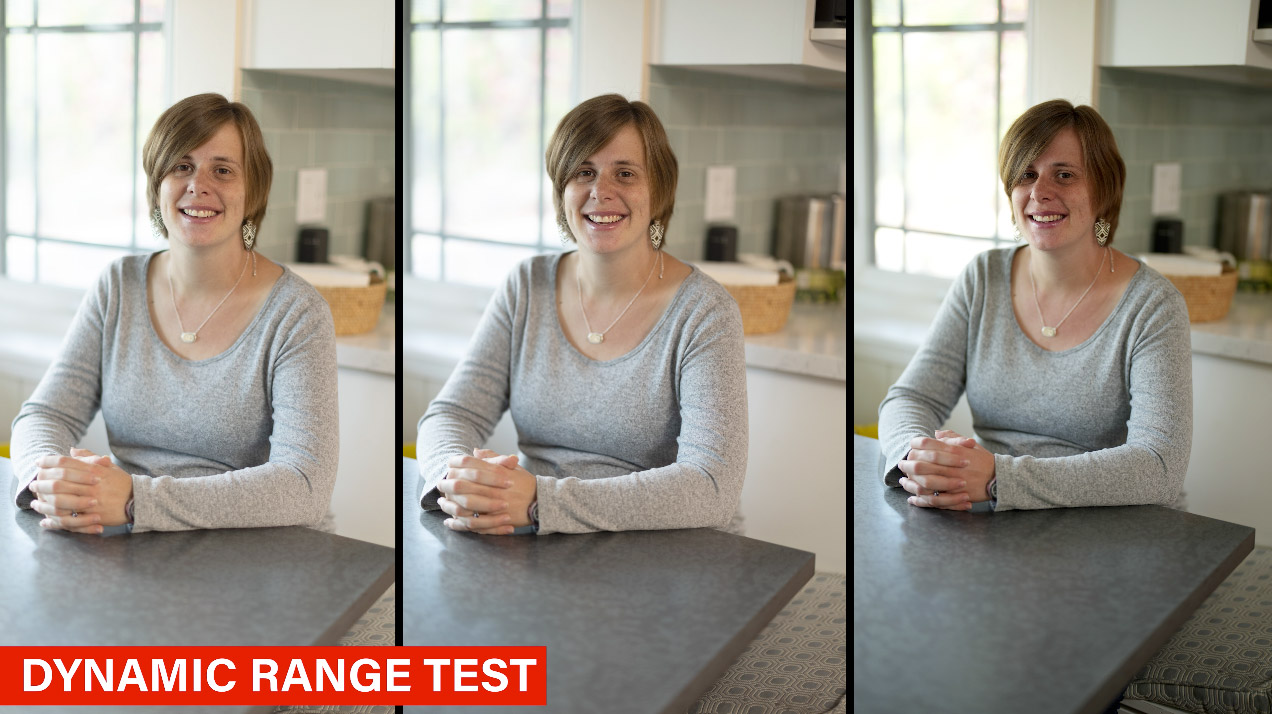 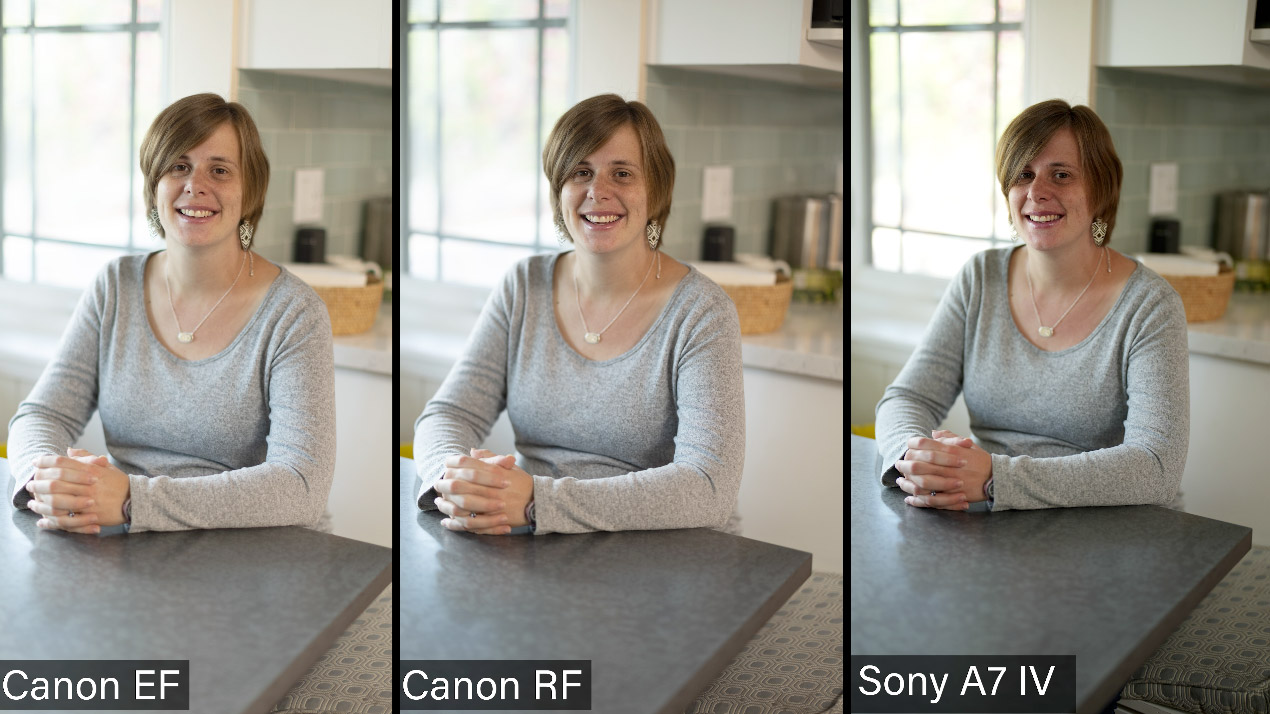 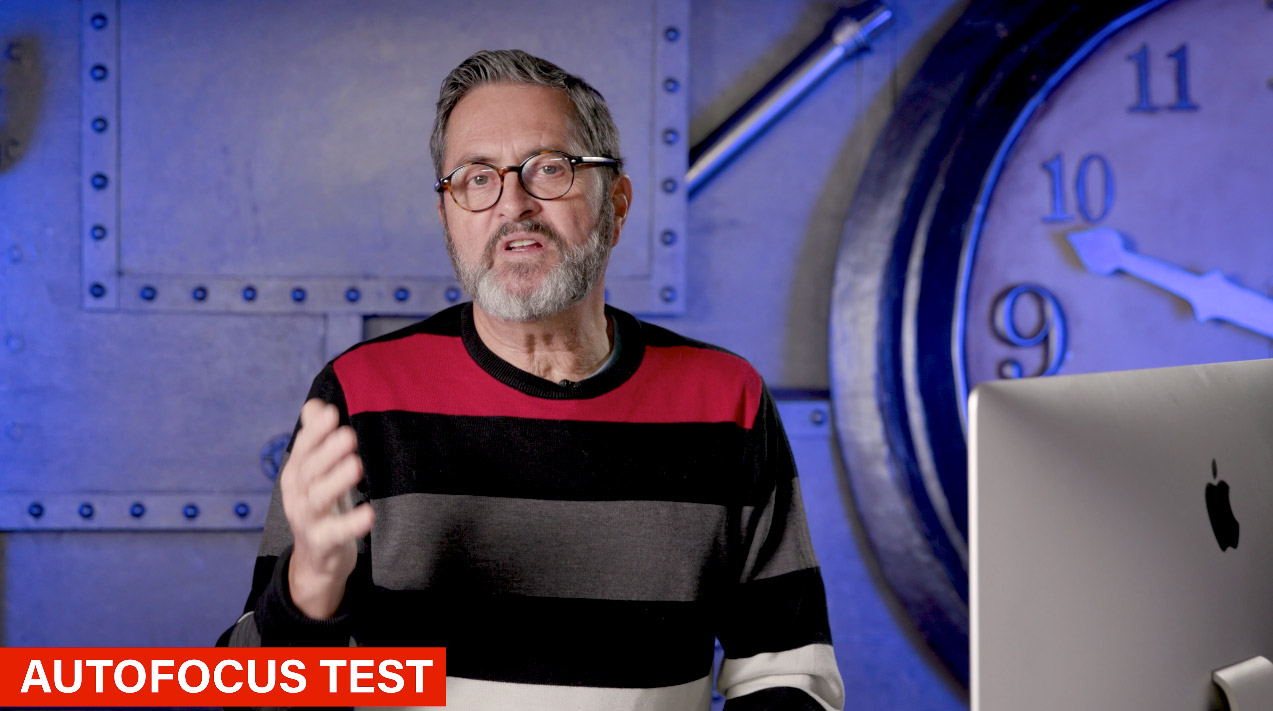 All right, let’s look at autofocus now. We’re shooting these two cameras at about the same frame rate. We’re getting about 25 frames for the time it takes me to walk to the camera. So about 25 frames each. 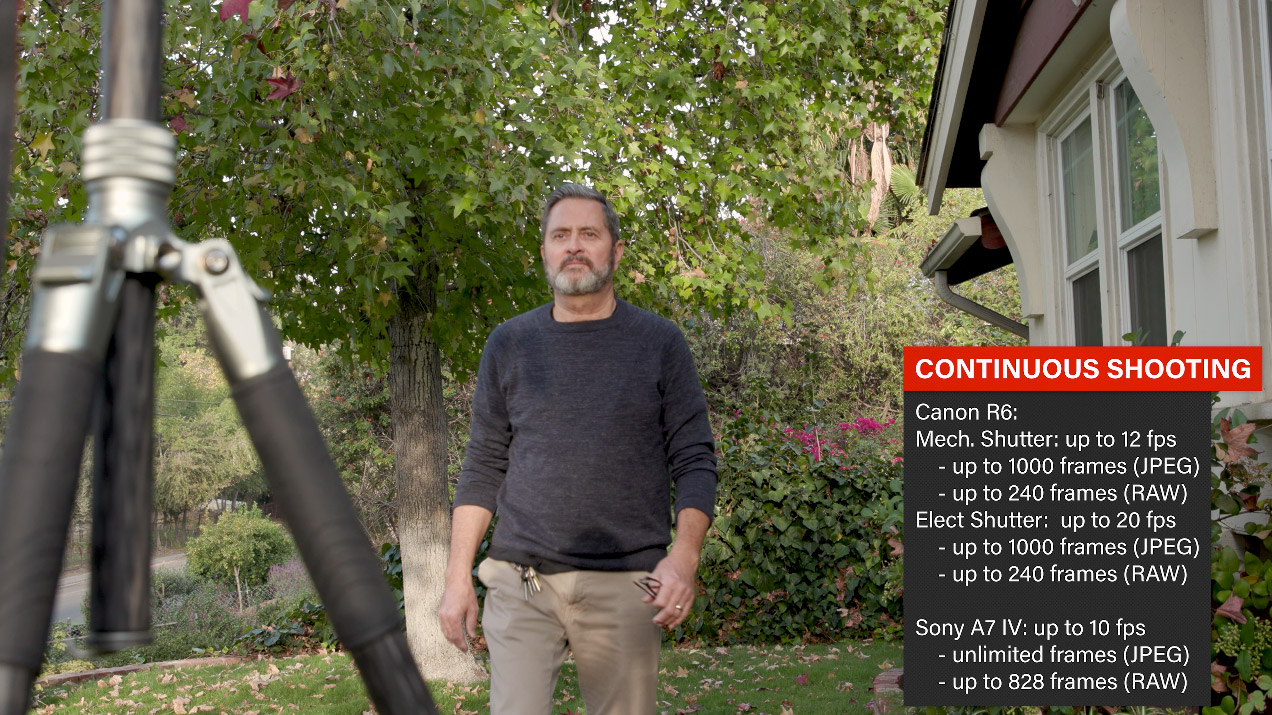 So it’s not like one is shooting 50 and the other is shooting 25. They’re both shooting 25 frames. I’m walking at a steady pace, not fast. I took my glasses off so it doesn’t have any issue with the glasses with regards to focusing on the eyes. 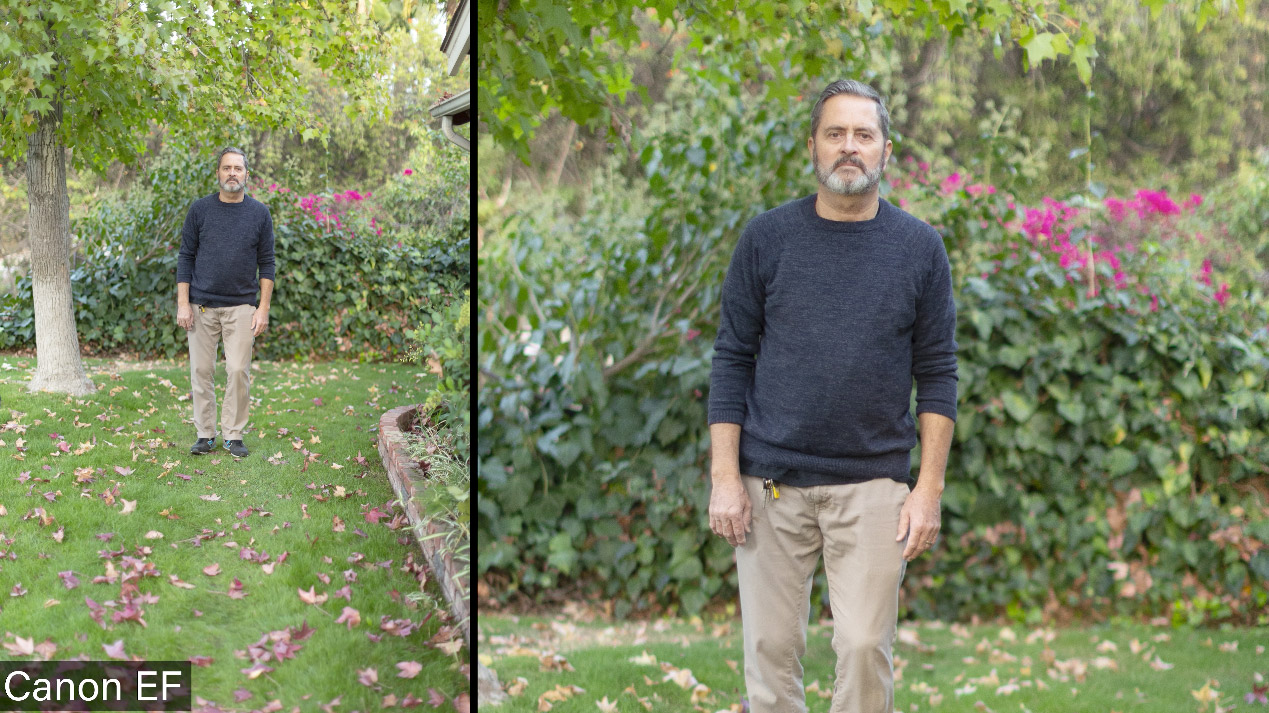 Which is kind of another issue that is bothersome a little bit. Some cameras have a hard time with that. So first off let’s look at the EF. So the EF tracks and stays with my face right through the process. Like a little in the transition, there’s a couple that are a little softish, but not bad. I mean at the very end I get an image that is out of focus right at the front. I don’t know why that is but then it picks it right back up again. So the EF did really well. It really did. 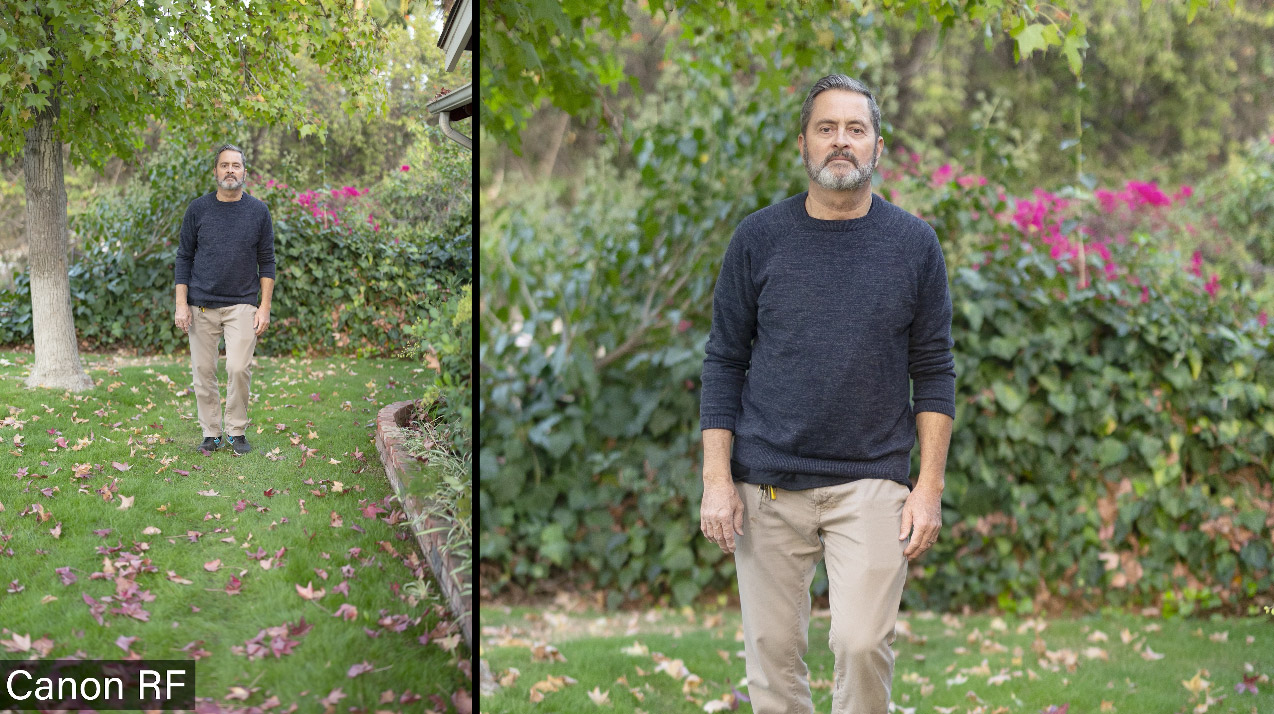 When I went to the RF this was super confusing to me because I shot this over and over again. And I seem to get the same consistent result. And that is that the RF lens, as I walk towards the camera, as it gets very close to me in that mid-range there, we lose two or three images every time. And it seems to be, it just seems to be consistently the case. I shot it over again. I shot it in really flat light. I shot it in direct sunlight. 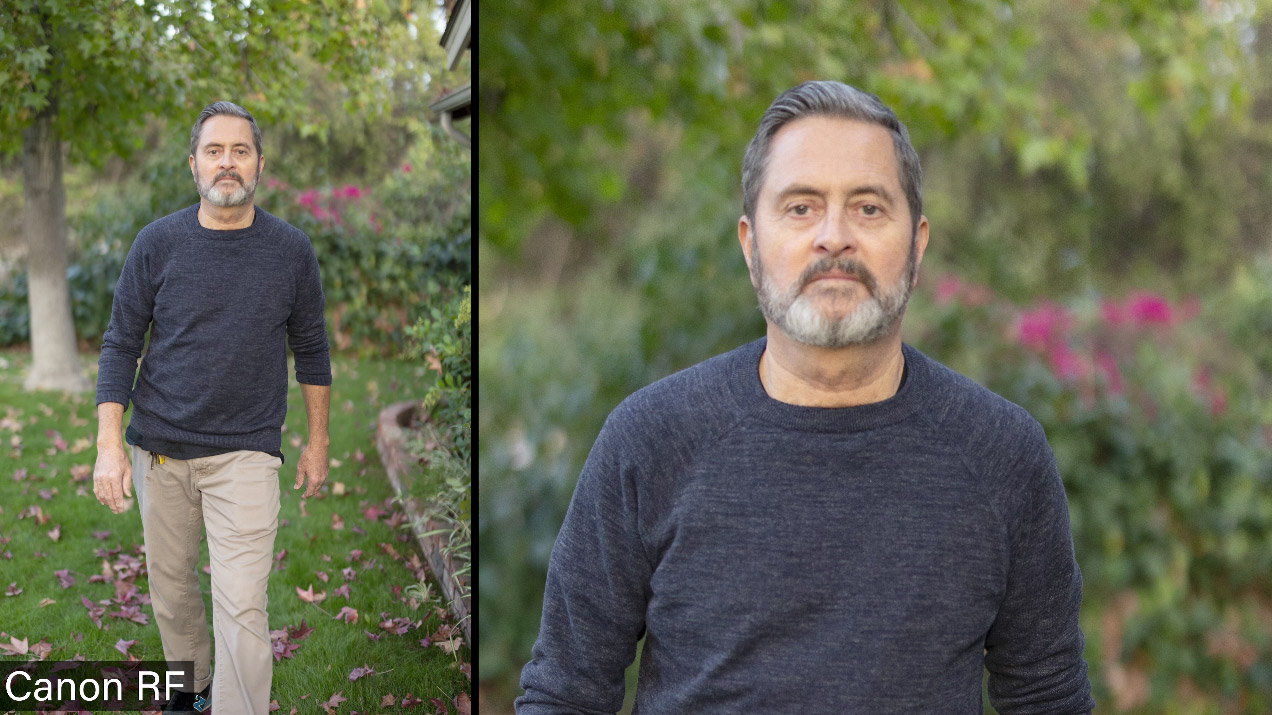 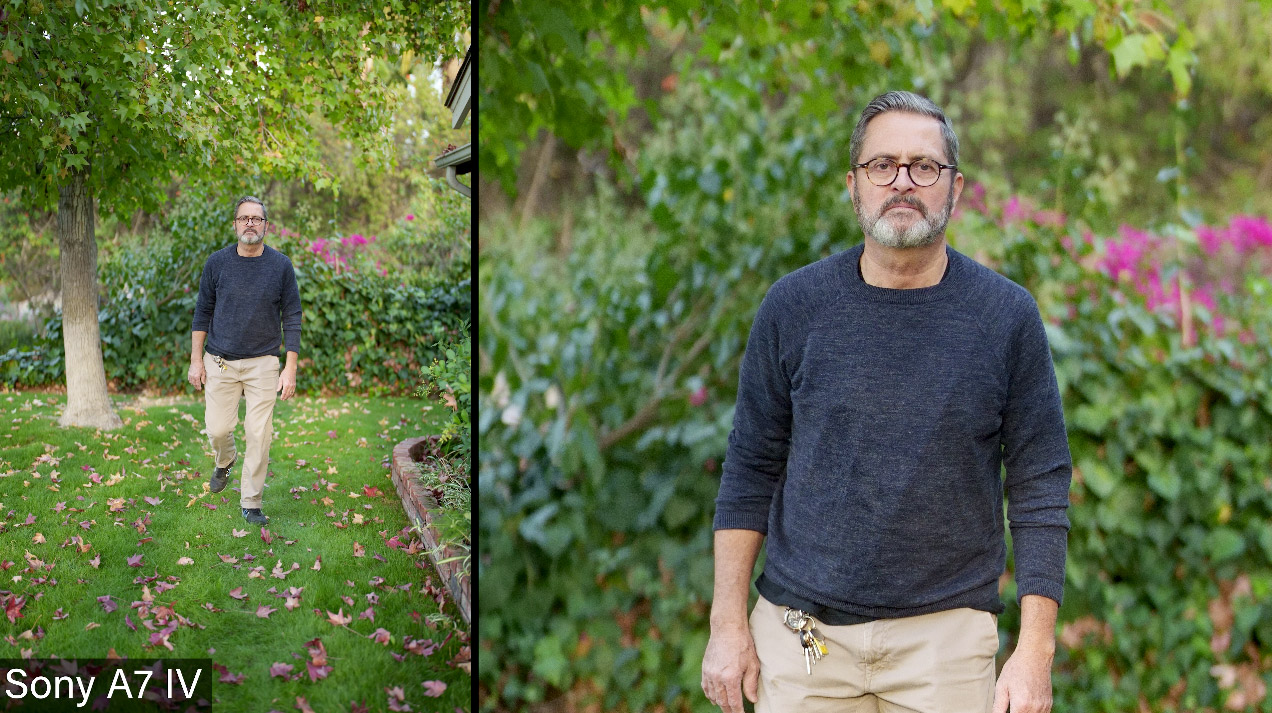 When I went to the Sony, and we shot this over and over again, the Sony just seems to stick all the way through. The Sony autofocus just seems to just nail it all the way through from beginning to end. There might be one at the very end where my face is a little bit in the corner on the Sony. And there is, okay, so there’s one at the very end there where my face falls a little out of focus. Right at the very end, the last shot. It’s probably pushing too far. Probably pushing up in out of those auto focus, not out of them, but up to the edge of the autofocus points. The eye is and I lost that one frame. So autofocus, the RF lens did not perform better than the EF lens did. And the Sony did better than both of them. 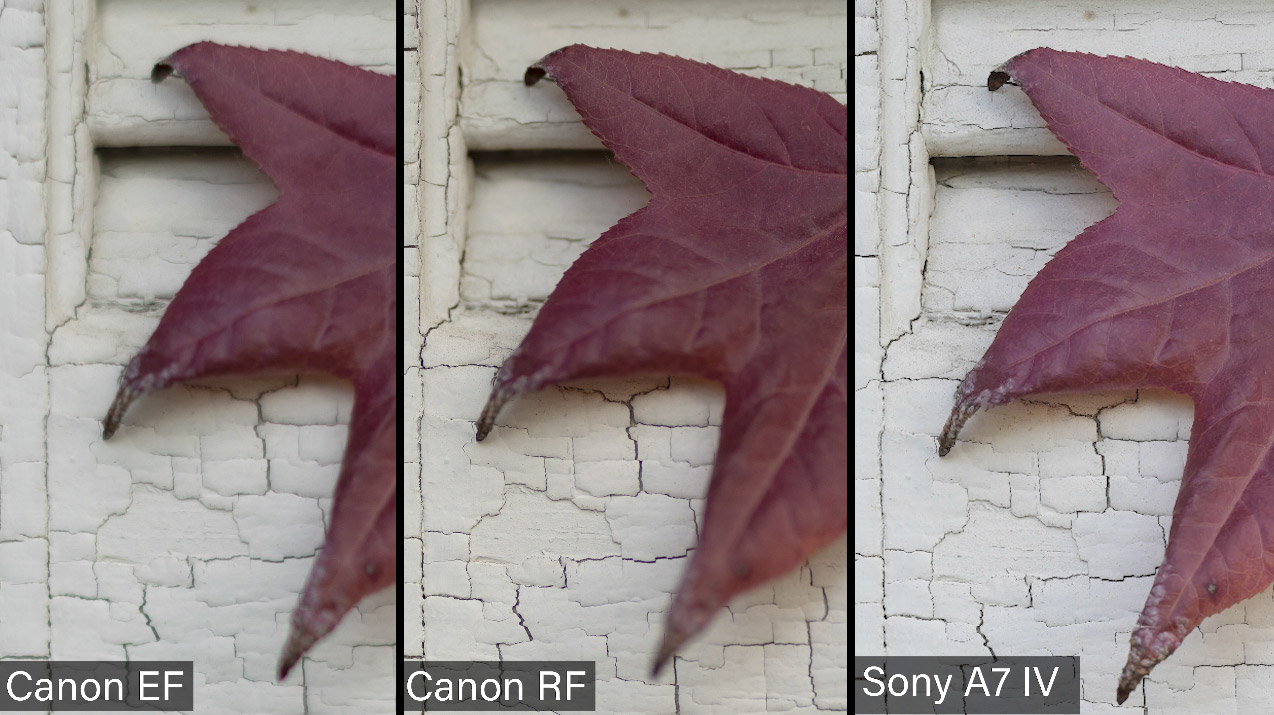 All right, let’s wrap this up. Yes the RF lens was better than the EF lens as far as sharpness goes. But was not better when it came to autofocus, at least in our experience with these tests. When it came to image quality, even though the RF lens was sharper, the Sony has a larger sensor and that 33 megapixel sensor just gives you more detail in the image. And you can see that when you put them head to head. Even with those two sharp lenses the Sony definitely has more image detail. Which you would expect it to have because of the sensor size. 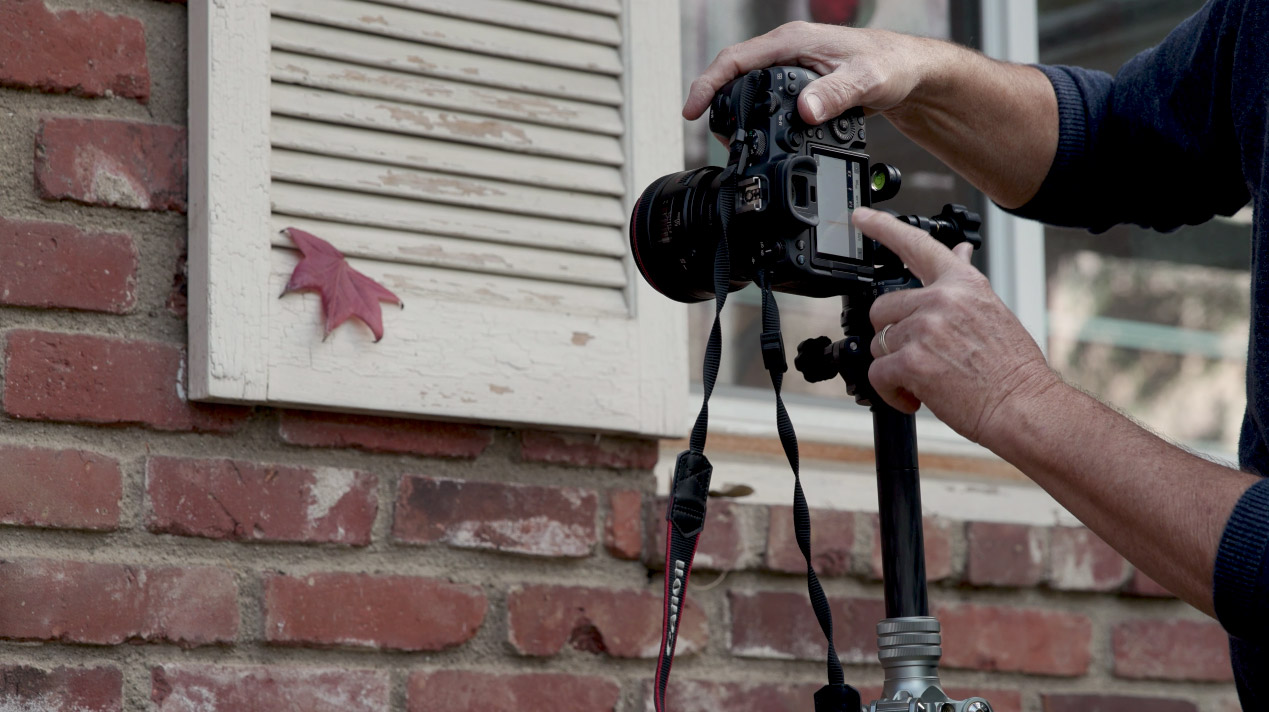 My feeling about these two cameras is that you have a great camera with the R6. You have an incredible camera with this a74. I think the a74, because of the megapixel size, is a better choice. But I think we just had to go back and do this test so that it didn’t look like we were trying to cripple the Canon and to give you the information so you can make a decision about which one of these two cameras you would buy. If I was a in the Canon ecosystem and had all those lenses would I drop everything and jump over to Sony? No, absolutely not. I don’t think the results were that astounding. But if you’re really wanting a camera that’s going to perform in a great price point that new a74 is an incredible camera. It really is. So there you go. Get that egg off our face. We’re done with it. So I hope you found this interesting. So keep those cameras rollin’ and keep on clickin’. 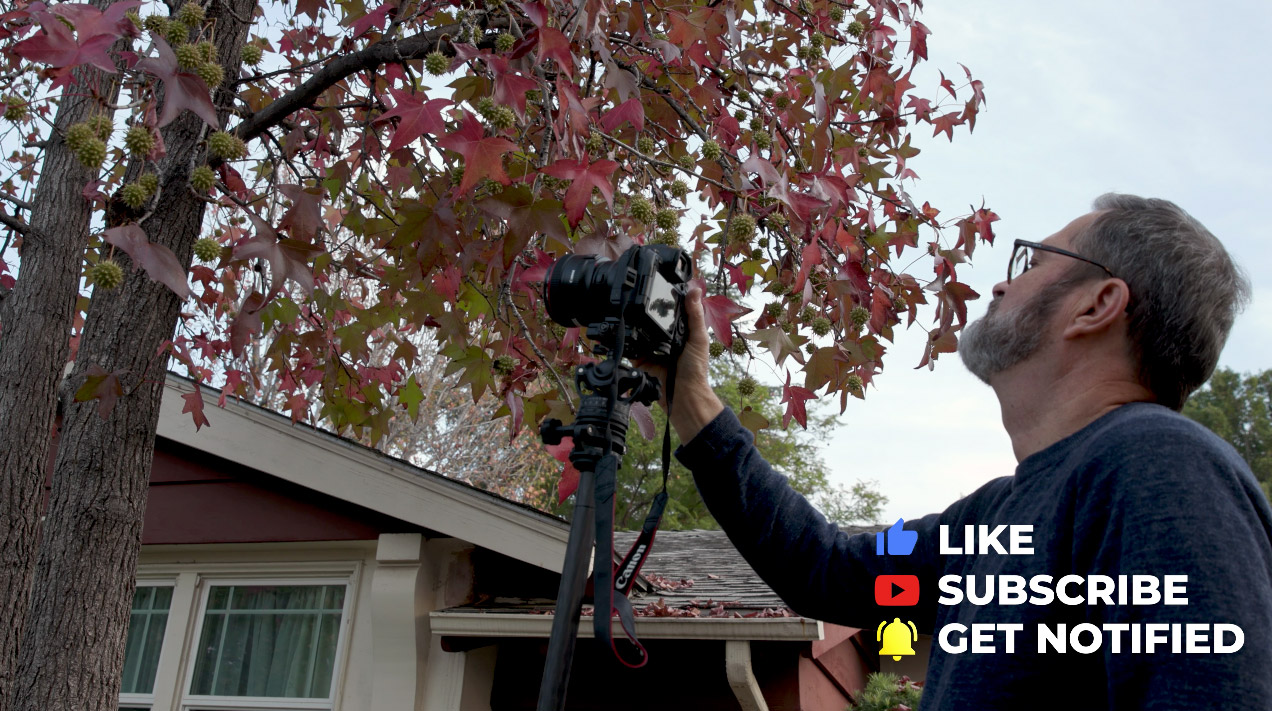 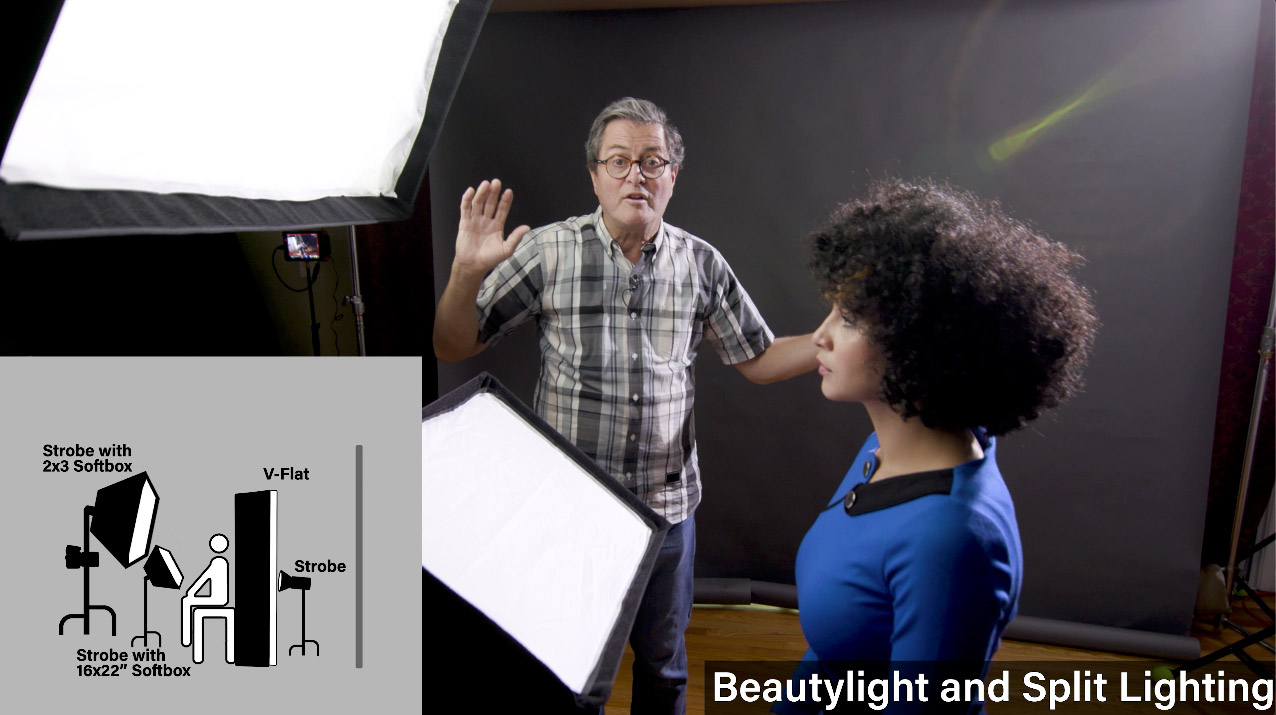 I love lighting and I want you to love your lighting. So we put together a portrait download that’s going to teach you the things you need to know to be able to pose and light and get great portraits. So if you’re interested in improving your studio portraits get over to theslantedlens.com  and click on the store and get our portrait download. I think you’re going to find it’s really valuable! 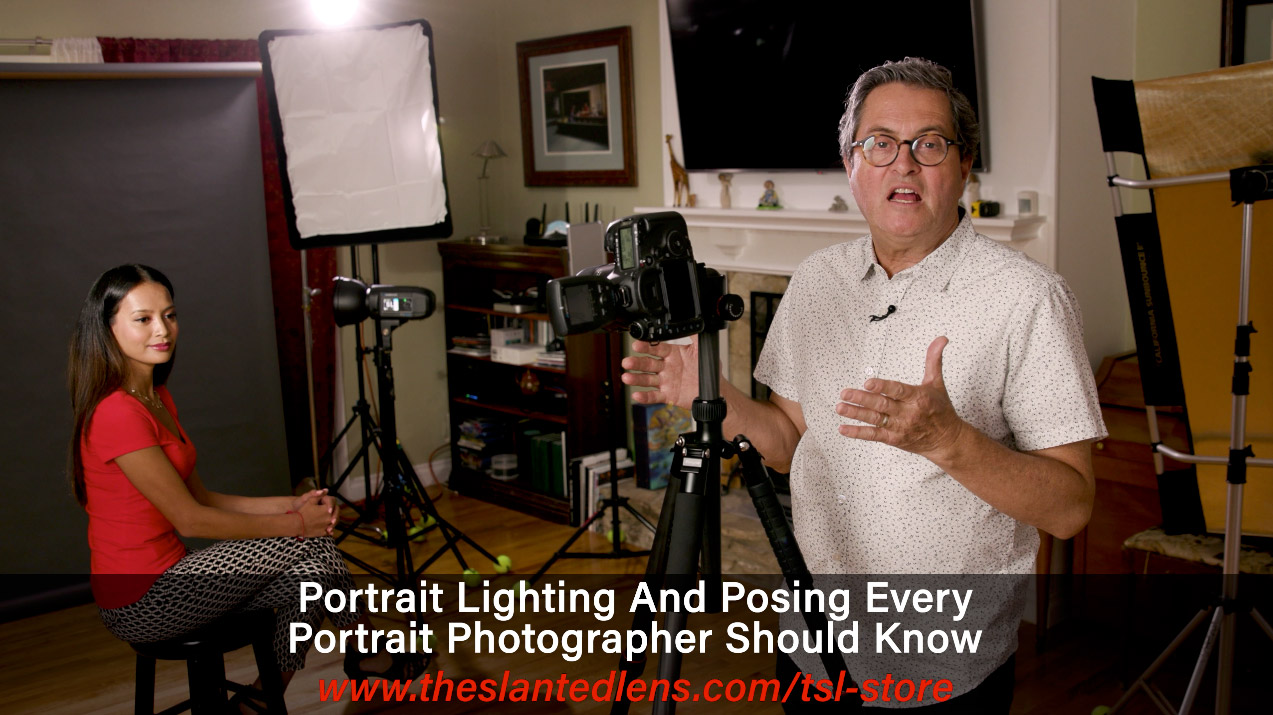